Would you like to be notified when the CONNECTED movie becomes available, or to set up a private screening?


If so, please enter your first name and email below.

"The Mission & The Impact of Joe & Connected Really Resonates So Deeply With Me."

"It's Inspiring To See How He's Successfully Curated Geniuses To Collaborate For The Betterment Of Humanity."

"I Was Really Moved By His Personal Story."

"I Recommend People Watch The Movie, It's Eye-Opening & 'Home Coming' To See That It's Possible That You Can Have What You Want." 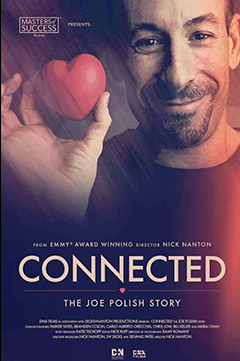 THE STORY BEHIND THE STORY: One of Joe’s very successful clients Devang Patel, anonymously funded the documentary about his life, “Connected: The Joe Polish Story” and 11-time Emmy Award winner (and Genius Network Member) Nick Nanton produced it. He knew a movie was being made, but had no idea who the anonymous backer of the documentary was. It wasn’t until November 3, 2018 at the Genius Network Annual Event when we ended up playing the documentary that it was revealed to be Devang Patel.

When Joe saw the documentary for the first time in front of just under 400 people, it brought many people to tears…

And that’s a big part of what this film is about: Becoming a better person...a better Entrepreneur...a better human...and doing it through CONNECTION. Getting connected to others, getting connected to YOURSELF, and the transformation that’s possible in your life and the lives of those around you when you do.

P.S. Here’s a synopsis that was written about the film: “Connected is the breakout biopic documentary from 11-time Emmy Award winner Nick Nanton that follows Joe Polish: business man, marketing guru, and worldwide connecter. Delving into his hardships from growing up and succumbing to the powers of addiction to ultimate success, Joe is a man with a positive attitude who was determined to not only get clean, but become a powerful force in business. Through a failed carpet cleaning business, a growing rolodex and a lot of life lessons, Joe became the positive energy who founded Genius Network, an exclusive place where industry titans from the corners of the globe come together to cultivate their next big ideas. Figures including Sir Richard Branson, Tony Robbins, and Ariana Huffington attribute many of their own successes to Joe, and also appear in the film.”

Get Joe's Life Gives To The
Giver Book for FREE

Many Entrepreneurs and small business owners are experiencing frustration and anxiety as they navigate the COVID-19 outbreak. It’s happening at all levels of business and community, even for us. That’s why Joe has decided to make this book available for free.
This book is a curated collection of short insights on Wellness, Success, and Business. It’s packed with wisdom and witticism to give you confidence, direction, and emotional wellbeing as Entrepreneurs in these uncertain times.